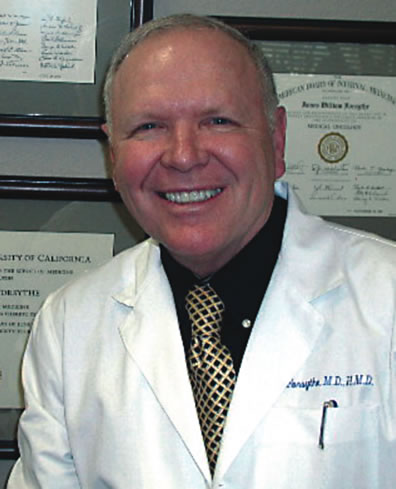 James W. Forsythe, MD, HMD, has long been considered one of the most respected physicians in the United States, particularly for his treatment of cancer and the legal use of human growth hormone. In the early 1960s, Dr. Forsythe graduated with honors from University California at Berkeley and earned his Medical Degree from University of California, San Francisco, before spending two years residency in Pathology at Tripler Army Hospital, Honolulu. After a tour of duty in Vietnam, he returned to San Francisco and completed an internal medicine residency and an oncology fellowship. He is also a world renowned speaker and author. He has co-authored and written chapters in best sellers and has been featured in online series. To name a few:

Leading the way to better health.

While a standard allopathic physician and before he became boarded as a Homeopathic Physician, for a number of years, he served as the only oncologist in Northern Nevada who would treat cancer patients that also were under the care of an alternative medical physician. From the 1970s through the early 1990s, he observed that patients who were integrating conventional treatments with alternative therapies were doing better. While enjoying a quality of life far superior to patients who received only standard-oncology treatments, these people with cancer had fewer side effects from chemotherapy.

These results convinced Dr. Forsythe that—while conventional medicine had made great strides with chemotherapy drugs targeting specific cancers—so-called standard medical methods lagged behind in keeping the patients’ immune system stimulated. More than 25 years after becoming a certified medical oncologist, in 1995 Dr. Forsythe also earned a homeopathic certificate from the British Institute of Homeopathy. He started the oncology units at all three major hospitals in Reno, Nevada as well as the Veteran’s Hospital Oncology Clinic. He also was the founding father for Reno’s Ronald McDonald House. Most notably he warned of the “Cancer Cluster” in Fallon, Nevada due to high levels of arsenic in the ground water.

Dr. Forsythe has been married for 45 years to Earlene Forsythe, an advanced practitioner registered nurse and business manager of their clinics. Together they have raised 5 children. In his free time, Dr. Forsythe enjoys tennis and gardening.